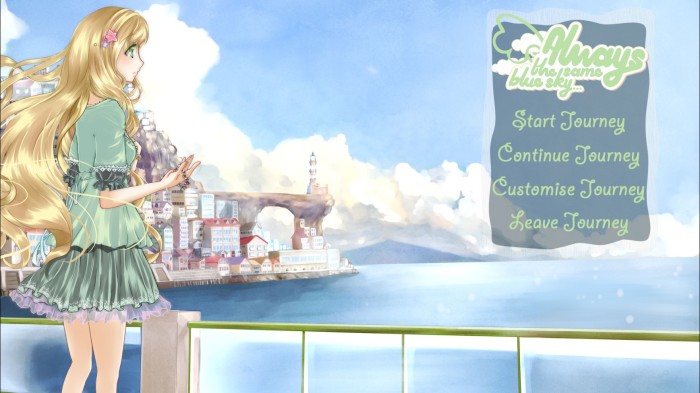 This bittersweet romance set beside the blue, blue sea is a lovely experience, but its stunted length really lets it down in the end.

This short game is the debut visual novel from a Western indie developer, in which you meet a beautiful and mysterious girl with a secret in a charming town beside the sea. The story is interesting, the writing is good enough, if a little purple-prosey at times, the art is lovely, and the music is sweet. The recipe for success is all there, but it’s just way too short for it to have any real impact. While there are a relatively high number of decisions to make in a game this short and two distinct endings to reach, it took me no more than 45 minutes to complete the game in its entirety.

One of the main things I enjoyed was the atmosphere of the town beside the sea. It made a really nice backdrop to the story and I would have liked to have spent more time in the setting. The use of lots of different backgrounds further brings the location to life, and all of them are very pretty with great use of colour.

The only character you interact with is Kira, and she’s very prettily drawn with waves of soft golden hair. However, there was barely any time for us to get to know her and for her relationship with the protagonist to develop. (By the way, I have to give kudos for having the option to play as either male or female. I like this trend in Western VNs.) At no point did I really believe that feelings had developed between the two. The reveal at the end is also rushed and there isn’t really time for it to sink in before the game comes to an end. Everything feels disjointed, as though it’s just snap shots of a larger picture. There are some attempts to touch on topics surrounding human nature, but again, you can’t do that successfully when you only have a few lines allocated to it.

Unfortunately, due to the length of the game, I can’t recommend paying for it. Even though it’s cheap, in my opinion this should have been released as a free game. I would, however, like to see more efforts from this developer in the future as I think there is real promise shown here.

Disclaimer: I received a review copy of this game.